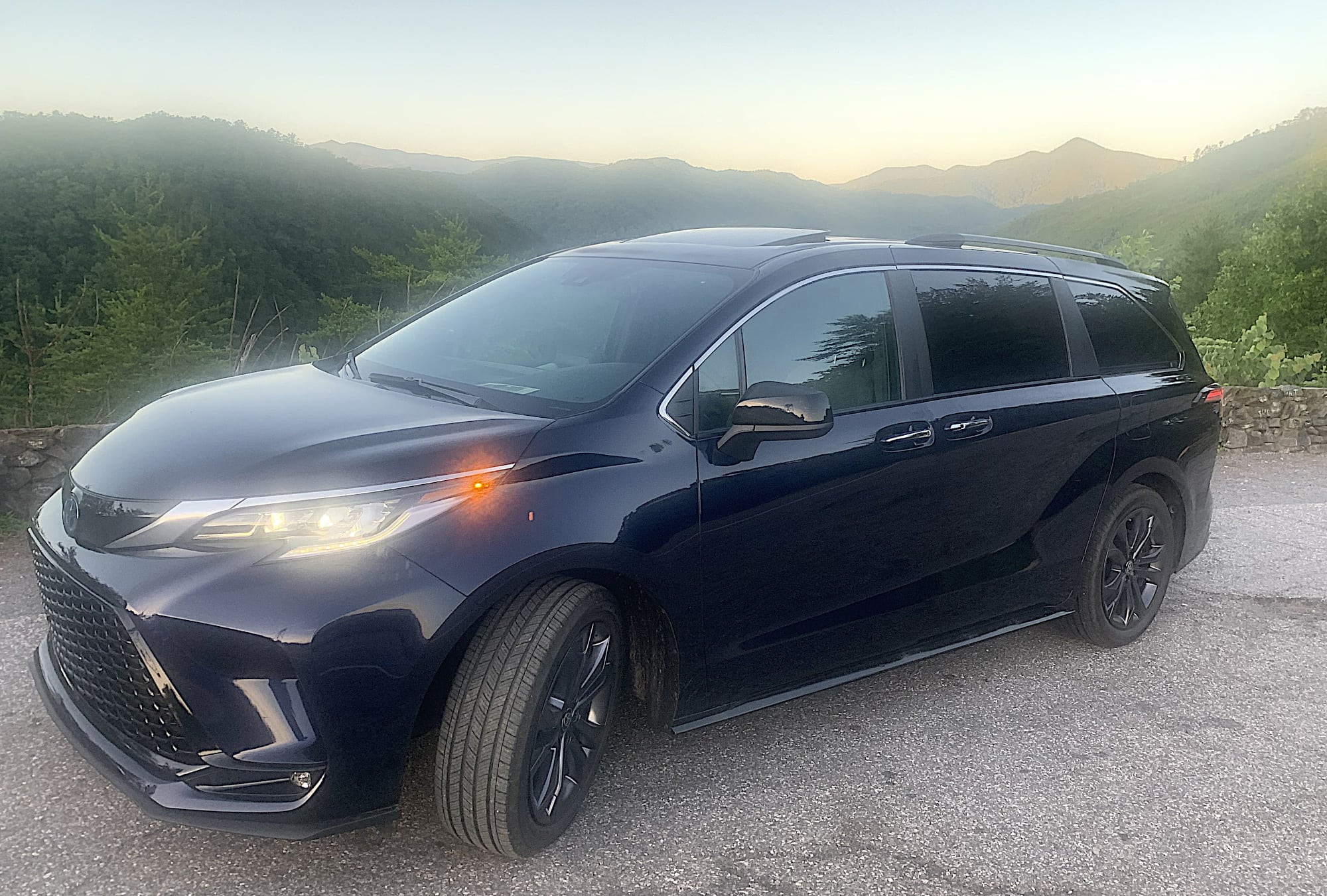 It had been a beautiful day and now with night quickly passing through the Nantahala National Forest, which, like the adjacent Smoky Mountain National Park, is strikingly more beautiful and generally free of tourists, I anticipated a great night’s sleep.

As night fell, the fresh and clear mountain air blew through the tall trees under a crystal mountain sky. A wave of satisfaction washed over me as I headed down the hill to my campsite, about 50 yards from where I had just had a wonderful meal with my son Boy Wonder and his rambunctious crew.

Getting there was pretty cool, thanks to the 2022 Toyota Sienna Woodland Edition XLE AWD ($46,075). This was when gas was pushing $5 a gallon. All Sienna Hybrids, including the four-cylinder, 2.5-L engine that is replaced by an electric motor. The Woodland version has a second electric motor in the rear that gives it all-wheel drive. It sits about an inch and a half higher, which makes it perfect for the Forest Service roads I like to explore.

Like most hybrids, the Sienna is remarkably torquey. It’s smooth and powerful on take-off as well as accelerating around lane-blocking 18-wheelers that turn Interstate 30 into another version of Mad Max.

I topped out at Texarkana just before dawn with regular unleaded and battled truckers across Arkansas and East Tennessee. I passed Nashville while refilling the Sienna’s 18-gallon tank. When I got to the campground, about 720 miles from home, I still had about ¾-gallon in the tank.

For the day, the cavernous seven-seater exceeded its advertised 36-mpg fuel economy, despite being driven slightly above the posted speed. In fact, I would only fill it once to complete the round trip.

Meanwhile, the Sienna’s large, roomy front seats with lumbar controls and a quiet interior make for a pleasant, i.e. not tiring, ride. Its infotainment system synced perfectly with my iPhone, so I had all my apps and information at my fingertips. I was able to play my favorite Spotify playlists through a 12-speaker, JBL® sound system.

Like all Toyotas, the Sienna comes with an advanced driver assistance system, including lane-keeping assist and adaptive cruise control that keeps it a safe distance from the vehicle in front and applies the brakes when necessary. It also has an attention monitoring system that reminds drivers not to rely entirely on the computerized copilot, which always pays attention.

The system, plus things like blind-spot monitoring, takes a lot of the stress out of driving. The only problem comes when the system maintains a safe distance from the vehicle in front and a trucker sees this as an invitation to cut in front and slow everyone down.

Tailgate or cut off, those or today’s interstate options. How can truckers get into the fast lane in less than two seconds, but then – in the end – take the two lifetimes of a turtle to get back into their lane by overtaking whomever they thought needed to overtake?

I digress. The point here is that Sienna may not be sexy, but you’d be hard-pressed to find a good mate on the open road.

The real surprise in deep East Tennessee came when I hit US 129 and the set of wicked twists and turns that lead to Deal’s Gap, NC, the entrance to Nantahala. Known as the Dragon’s Tail, the road has 318 curves in 11 miles and no side roads. This encourages some people to exceed posted limits

I’m not sure if it’s just me, because I don’t remember noticing the speed limit sign.
It attracts thousands of bikers and sports-car enthusiasts and is the site of multiple fatalities each year.

I arrived mid-afternoon, and traffic was moderate to light. Sienna surprised me with her grace and sure footing through many turns. Body fat was minimal, and the all-wheel drive gave it a great ability to accelerate through curves.

Just to be sure, I looked in the mirror and pulled over for some very talented guys on a supercar and sports bike.

On the other hand, I had to brake to keep from running over fellow baby boomers riding their lightning hogs. Viagra Patrol, I call them. These guys know how to look cool but, with two wheels or four, they still don’t know how to drive in the mountains. They seemed dismayed to see a minivan filling their mirrors.

Perhaps it was my smile.

Knowing their egos would never let them pull through, I just slowed down and enjoyed the view.

After a scenic drive up Santeelah Creek, I was soon at Chioh Point Campground, located on a peninsula in the massive Lake Santeelah created by one of the Tennessee River Valley Authority’s uppermost dams.

The lake is located within the 1.3-million-acre mountain range that comprises the Nantahala National Forest, south of the Great Smoky Mountains National Park. Once the center of the Cherokee Nation, Nantahala means the Land of Early Sunsets because of its steep terrain and deep canyons. Sunset is fast.

Half a century ago I ran as a college student. Since I went to school in Florida, I went up north during spring break. I was going to nearby Gatlinburg, Tenn., but never got there. Instead, I spent the week exploring Nantahala. The beauty of the country captivated me, and the absence of tourists left my soul alone and searching for it.

It would be another 20 years before Boy Wonder joined this life and often I would tell him about this place; Still, this year presents the first occasion we could go. He and Tabitha and the kids got there a day before me. When I arrived, my jaw dropped when I discovered that Chioh Point is still largely unexplored.

On the busiest weekend of the year, half the campsites were empty, and the place was refreshingly quiet, although little Tamra, JD and Charles certainly did their best to overcome it.

After a good meal we came to the water’s edge. There are no towns or major roads nearby, so nighttime in Nantahala is as quiet as a monastery and as dark as a raven’s back. An ocean of bright stars was perfectly reflected in the still waters of the deep mountain lake.

Soon, I was ready to crawl into my hammock tent and fall into the comforting embrace of the night mountain air.

I slip in, I find that perfect spot and, darn it! My left foot poked through the bottom of the hammock, which instantly ripped wide open and dropped me onto my derriere in a flurry of forest floor detritus.

A nearby owl screeched at my disrespect.

As I stood and removed the leaves from my sleeping bag, I contemplated my next move.
I could either sleep on the ground, without a mattress or bug net, or I could climb on the back of Sienna. I chose the latter and it was pure serenity.

The Woodland version has second-row captain’s seats that are non-folding and removable. The space between them, however, was perfect for my pillow. I had already folded down the third row seats, which left a perfectly flat, carpeted area on which to sleep. I could not have been more comfortable.

Wait, yes, I could. Here’s the thing, I’m supposed to use a CPAP machine, a device that overcomes sleep apnea. I lost a lot of weight this year and didn’t need it as much, so I felt like I could camp for a few nights without it, but I packed it, just in case.

The Woodland version, it turns out, comes standard with a 15-watt converter and two 120-volt outlets. I was able to plug in the machine. For most nights, the van’s hybrid battery runs the machine. When it sensed that its charge was running low, the petrol engine started for a while.

I would retrieve the bug netting and drape it over a few open windows to let in that delicious, crisp air. With my phone plugged into one of the van’s seven USB ports and the sound system softly playing my favorite sleep music, I was sleeping the righteous.

Do you think a big ole Harley-Davidson is cool? Not as cool as Toyota’s minivan.