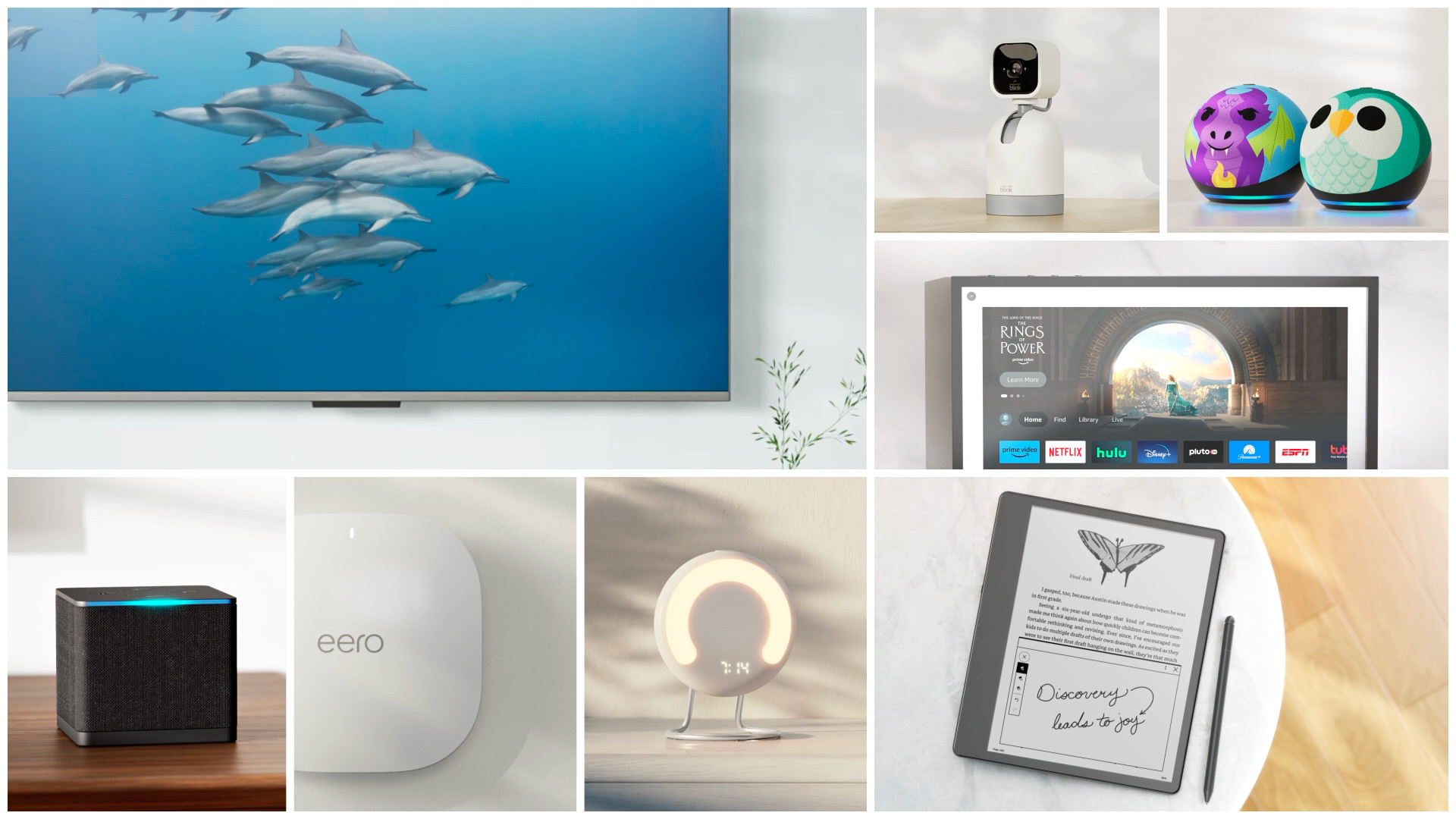 Amazon – which at this point has its fingers in so many different pies that it’s hard to know what to call it other than a ‘tech giant’ – has unveiled a slew of new smart devices as it continues its drive to smart home supremacy.

Amazon has dropped four new/refreshed smart speakers to its arguably market-leading line-up – the Echo Auto, Echo Studio, Echo Dot, and Echo Dot with Clock. Try saying that after a few.

The Echo Dot and Echo Dot with Clock are still the most powerful, according to Amazon, although it would be strange for them to launch sharper versions. They come with a redesigned audio architecture with a full-range driver and the loudest excursion speaker of any Echo Dot, the main result of which seems to be doubling the bass levels of the previous generation.

They have sensors that enable ‘more contextual Alexa experiences’ – an example of what that means is the ability to ask Alexa to automatically turn on a smart fan when it’s too hot inside. They also have accelerometers that enable tap gesture controls. They come with AZ2 Neural Edge processors on board, which apparently enables more ‘experiences’ to be processed at the edge.

Perhaps most interestingly, they also serve as eero mesh wifi extenders to improve coverage around the house.

The flagship Echo studio gets various audio gubbins upgrades, while the Echo Auto – aimed at bringing a smart speaker to the car – is more svelte and appears to have added some services like roadside assistance: “Just say,” Alexa, send call Roadside Assistance” to connect with an agent who can request assistance for you, and you’ll only pay for the services you need, such as if you get a flat tire or run out of gas,” says the released. .

This is a non-contact sleep tracker – which probably means no straps required – and a smart alarm loaded with a wake-up light. Machine learning and sensor provide ambient analysis of sleep patterns and provide some insights, we were told.

There’s an effort to tie it into the wider Alexa ecosystem – something every business in the space wants to do because it means you can sell them a million connected products and you’re less likely to stray outside the product line – by hooking it up to echo devices so you can ask it how you slept from another room, if you need to know every now and then.

Amazon’s new smart TVs are packed with the latest TV hardware, and they’re the first TV option ever to feature the new Fire TV Surround Experience – for whatever that’s worth. The Omni QLED Series comes loaded with 4K Quantum Dot Technology (QLED) displays with full-array local dimming of up to 96 zones, and support for Dolby Vision IQ and Adaptive HDR10+. So it has a good picture – although the amount of progress made in TV screen technology in the last few years is perceptible to the human eye up for debate.

They also have voice control via Alexa with features that ‘always turn the TV into a smart device when not streaming’. This seems to mean that the TVs use sensors to detect when someone enters the room and take that as a cue to turn on a hub screen to manage various other smart home devices, play content or , or show pictures.

“We’ve all been buying so-called smart TVs for years, but they’re not all that smart – and for much of the day, they’re not pretty or useful either,” says Daniel Rausch, vice -president of Amazon. Entertainment Devices and Services. “The Omni QLED Series delivers stunning artwork, visible information, hands-free controls, and more – it reimagines what customers can expect from a smart TV.”

The question remains as to why you’d fork out for a state-of-the-art smart TV when a dongle can provide access to the same online services for a few quid, and connect it to a games console that could be in the home already. But some people like to have the new thing, of course.

The Kindle has long been synonymous with e-readers in general, and is Amazon’s earliest and most logical foray into consumer electronics given its historical roots flogging online books. As well as the usual incremental upgrades to internal data and screen resolution – something you never get with new editions of boring old print books – the main innovation is the ability to write as well as read, making it an e-notebook this as well as an e-reader.

“Inspired by Kindle customers who have added billions of notes and highlights to books over the years, it’s also great for reviewing and marking up documents, managing your to-do list, or thinking big,” said Kevin Keith. , vice president of Amazon Devices.

That technology isn’t new of course, but perhaps there’s something in the application that will make the ability to access existing online documents and scribble on them for work or play even more popular than as before.

Conversation about the smart home was doing the rounds in the tech industry long before there were any concrete products in the space. While many traditional hardware-focused tech firms have launched products into the field with varying degrees of success, Amazon has done more than most to bring home IoT devices to the masses, led by to Alexa devices.

Of course, for the few people left who are concerned about data privacy, there are still concerns about filling your home with internet-connected recording devices and big corporation’s hungry marketing algorithms – but on the other hand it’s pretty convenient to be able to bellow at. Alexa from the other room to turn up the music. The pros and cons of modern consumer technology in a nutshell.

This is a video.

Get the latest news straight to your inbox. Sign up for the Telecoms.com newsletter here.