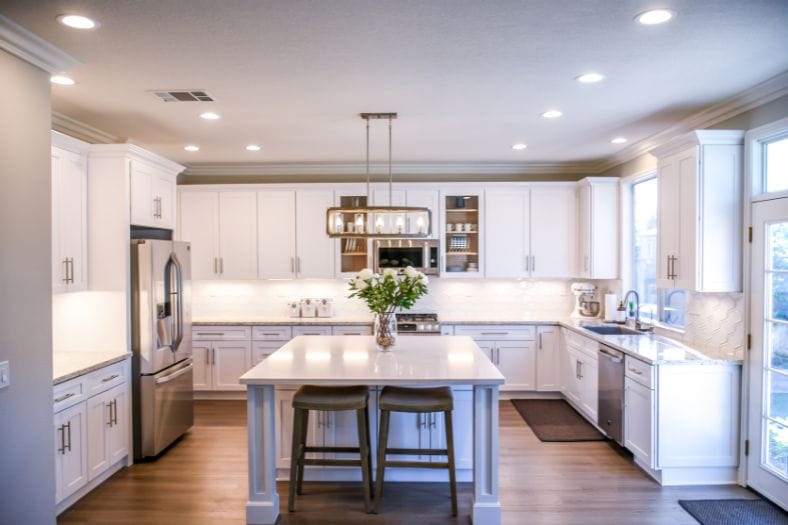 Although Apple HomeKit may not be commonly used compared to the other smart home kits, it is one of the best smart home systems to help you build your smart home in a breeze.

For example, if your smart garage door is HomeKit compatible, you can easily use the iPhone garage door opener app to control it remotely and keep track of the close-open status no matter where you are for peace of mind and convenience.

Whether you’re about to set up a smart home ecosystem for the first time or just want to switch to Apple HomeKit, keep reading this article for some benefits of Apple HomeKit!

Most homeowners dread buying a separate hub for their smart home because they don’t want to deal with the hassle of repeatedly setting up a new device, syncing it with other devices, and maintaining it .

Additionally, buying a separate hub for your smart home means you have to pay extra for the piece of hardware. However, the great thing about Apple HomeKit is that you don’t even need a separate hub because you can easily sync it with other Apple devices like your iPhone, iPad, and Apple TV and control the whole system through these devices.

The most important factor for smart home owners is their safety and security. No one wants cyber criminals to gain access to their smart devices by exploiting loopholes and compromising their safety.

Therefore, Apple HomeKit takes the security of its users very seriously by focusing on encryption of final data and processes and data is stored on the device instead of relying on external servers, which is incredible!

Even better, Apple has an MFi certification program that all hardware manufacturers and developers must adhere to in order to make their smart devices compatible with the Apple HomeKit ecosystem. They must use a security chip in their device and comply with their strict security requirements.

While we’ve just discussed how strong Apple’s HomeKit security system is, the same goes for user privacy. Unlike other top companies, Apple does not exploit users’ private and confidential information for profit.

Since it has an on-device processing system, it limits the amount of data sent to Apple’s servers. So, instead of pushing the message / command to the cloud, it maintains an exchange of information between the HomePod and your Apple device (such as an iPhone or iPad).

4. There is an Effective Voice Assistant

Since Siri is a trend-setter and pioneered the industry before Amazon, Google, and Samsung, you can definitely expect it to be an effective voice assistant.

Whatever voice commands you give Siri, it immediately interprets them and takes the right action, so you don’t even need to use your hands to control your smart devices. Here’s how it brings an abundance of comfort and convenience to smart home owners!

5. It only supports Mobile App Only

Of course, no one wants to deal with the hassle of controlling a wide variety of devices, such as smart locks, cameras, lights, and thermostats from different apps.

This is where Apple HomeKit fills the gap and allows you to control all your devices through one mobile app, rather than having to install different apps for different devices.

Some people assume that Apple HomeKit compatibility is not as extensive as the other brands in the market, such as Google Home or Amazon Alexa. However, this is not true. Apple HomeKit works with a multitude of accessories, from air conditioners, cameras, doorbells, air purifiers, fans, routers, faucets, TVs, and windows to sensors.

It is also compatible with a range of brands such as Phillips, Samsung, Yamaha, Honeywell, LG, Sony, and Nanoleaf to provide the best convenience for smart home owners.