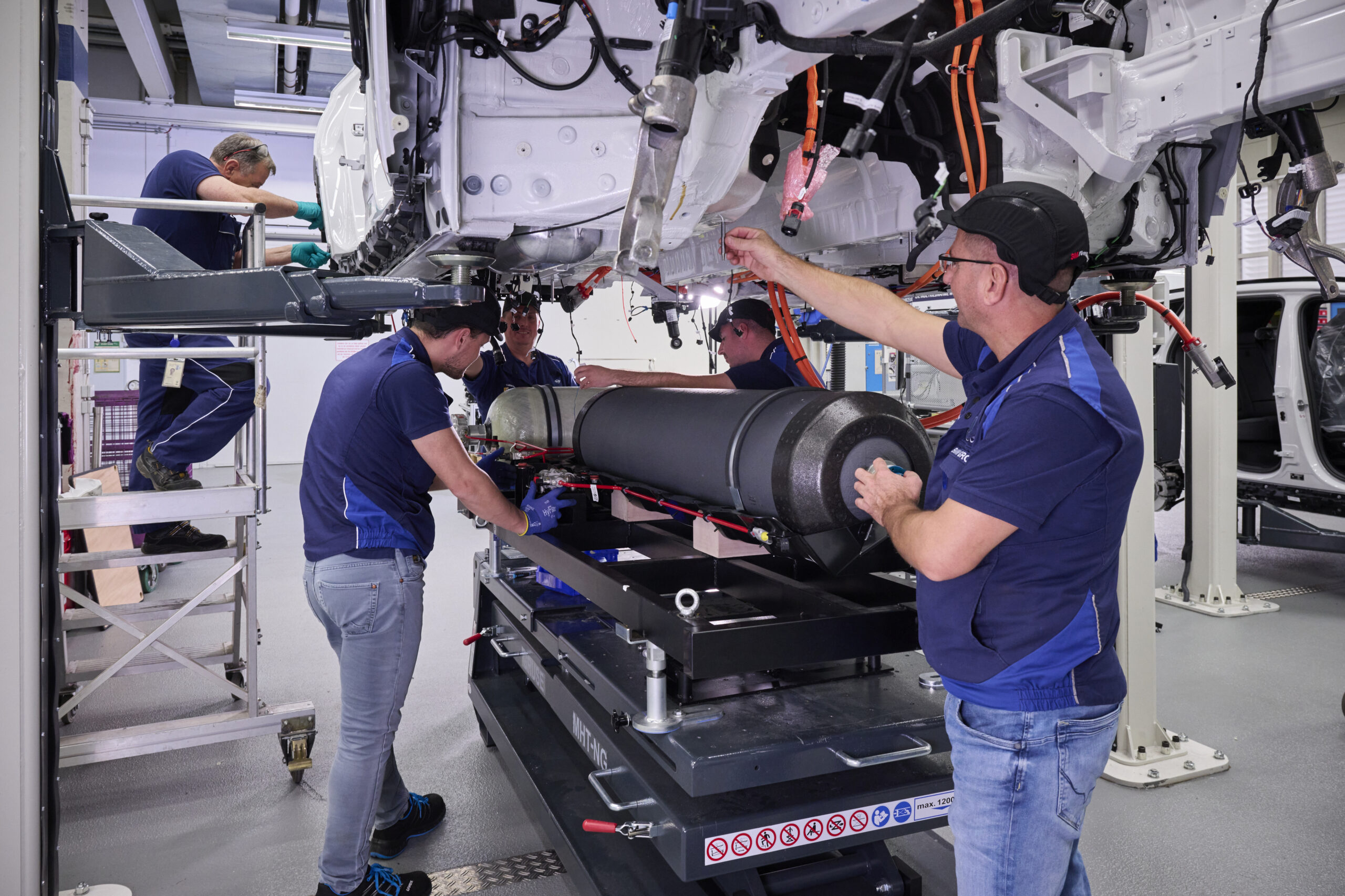 BMW Group has started production of its iX5 hydrogen model, the first sports activity vehicle (SAV) with hydrogen fuel cell technology, while Toyota is working to develop a hydrogen-powered prototype of its Hilux pickup truck.

BMW says “an intensive program of tests under demanding conditions” has already been completed during development and will now be used as a technology demonstrator for carbon-free mobility locally in selected regions from spring 2023.

“Hydrogen is a versatile energy source that plays an important role in the move towards climate neutrality,” said Frank Weber, Member of the BMW AG Board of Management. “We are convinced that hydrogen is set to gain significant importance for autonomous mobility and therefore consider the combination of batteries and fuel cell electric drive systems to be a sensible approach in the long term. Fuel cells do not require any critical raw materials such as cobalt, lithium or nickel, so such By investing in drive systems we are also strengthening the BMW Group’s geopolitical resilience. Our BMW iX5 hydrogen test fleet will allow us to gain new and valuable insights, enabling us to present an attractive product range to customers when the hydrogen economy becomes a widespread reality.”

BMW iX5 Hydrogen is being manufactured at the OEM’s pilot plant at its research and innovation center in Munich.

“The production of the BMW iX5 hydrogen and BMW-developed fuel cell system demonstrates our maximum flexibility and unmatched know-how in small-scale production,” said Milan Nedeljkovic, Member of the BMW AG Board of Management. “This shows that we already boast the necessary expertise to integrate hydrogen technology into the BMW iFACTORY production system as an additional type of drive.”

BMW’s Spartanburg plant in South Carolina supplies the base vehicle for the hydrogen model, which is built on the platform of the BMW X5. They were fitted with a new floor assembly in the body shop at the pilot plant which made it possible to accommodate two hydrogen tanks in the center tunnel and under the rear seat unit. Model-specific 12V and 400V electrical systems, high-performance batteries, electric motors, and fuel cells are all integrated at the assembly stage as well as standard production parts.

Located in the rear axle area with the high-performance battery, the electric motor is a product of the current, fifth-generation BMW eDrive technology employed in battery electric and plug-in hybrid models from BMW. The fuel cell systems under the hood of the BMW iX5 Hydrogen have been developed since August at BMW’s in-house Competence Center for Hydrogen in Gerching, north of Munich.

Numerous components are developed exclusively for the hydrogen-powered SAV, including some at the Additive Manufacturing Campus – the BMW Group’s competence center for 3D printing – which also forms part of the pilot plant.

Thatcham Research, Toyota Motor Manufacturing (UK), and a consortium of specialist industry partners are working together to develop a hydrogen version of Toyota’s iconic Hilux pickup. The consortium plans to convert Toyota Mirai fuel cell components into a hydrogen fuel cell vehicle. The multi-year project will see early vehicle prototypes built at TMUK’s Burnaston site in the UK throughout 2023.

To prepare the Hilux for the UK market, Thatcham Research will need risk intelligence and engineering expertise to assess the repair and safety implications of any adaptations made to the standard Hilux throughout the design process, a joint news release said. “This includes making recommendations for vehicle development to ensure strong passive and active safety performance, while providing early awareness of potential repair challenges.” 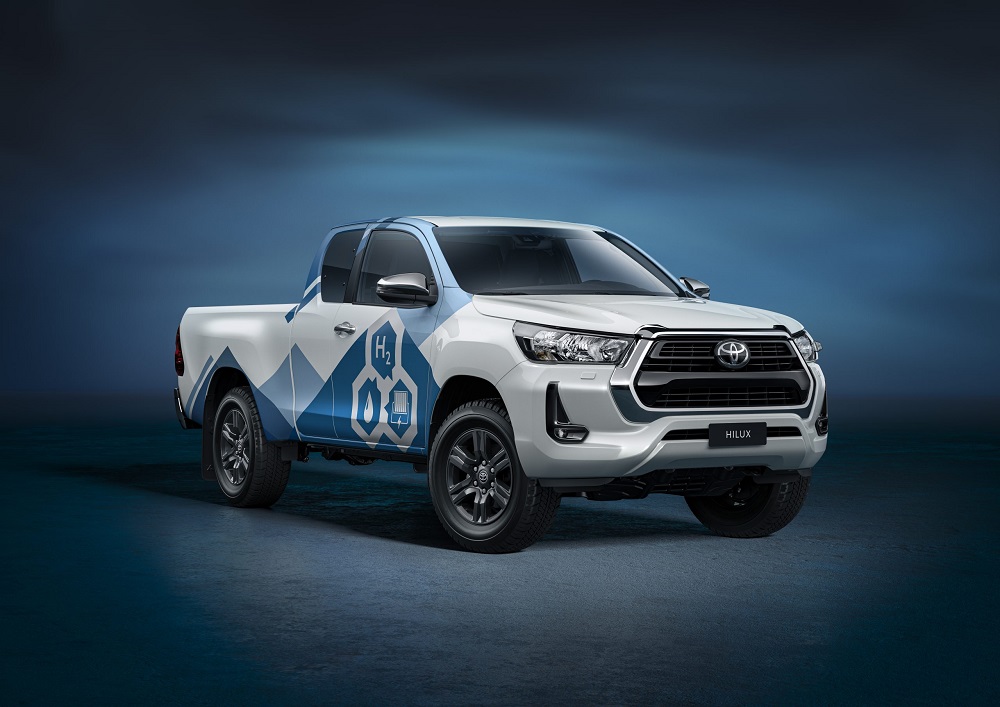 “Continued research and development of alternative fuels, such as hydrogen, also has the potential to play an important role in achieving the UK’s carbon neutrality targets,” said Miller Crockett, chief revenue officer at Thatcham Research, in addition to the decarbonisation opportunities offered by electric vehicles (EVs).

“This project is a good example of how government and the automotive sector can bring innovation and new growth opportunities to the UK motor industry. At Thatcham Research, we are supporting more and more OEMs in their complex journey through design consultancy, training and testing on insurance-critical aspects such as repair, maintenance, safety and durability. A collaborative relationship between OEMs and the insurance sector benefits everyone, and is a great model to put into practice.”

More than 30 countries have published hydrogen roadmaps and the industry has announced more than 200 hydrogen projects and ambitious investment plans, according to the news release..

“This is a very important project for Toyota and the consortium,” said Richard Kenworthy, managing director of Toyota Motor Manufacturing (UK). “It’s great to work with a well-established company like Thatcham Research and recognize what they can bring to this project. Their experience and knowledge of the repair and safety aspects of vehicle development will enable the larger automotive sector to improve and develop hydrogen. This will have a direct impact on the final car insurance rating. We are confident that this is a winning combination of companies that can collectively contribute to the hydrogen landscape, supporting new work efficiencies and moving forward.”

Toyota is working with Thatcham Research and others in the UK to develop a hydrogen fuel cell prototype for its Hilux pickup truck. (Credit: Toyota/Thacham Research)