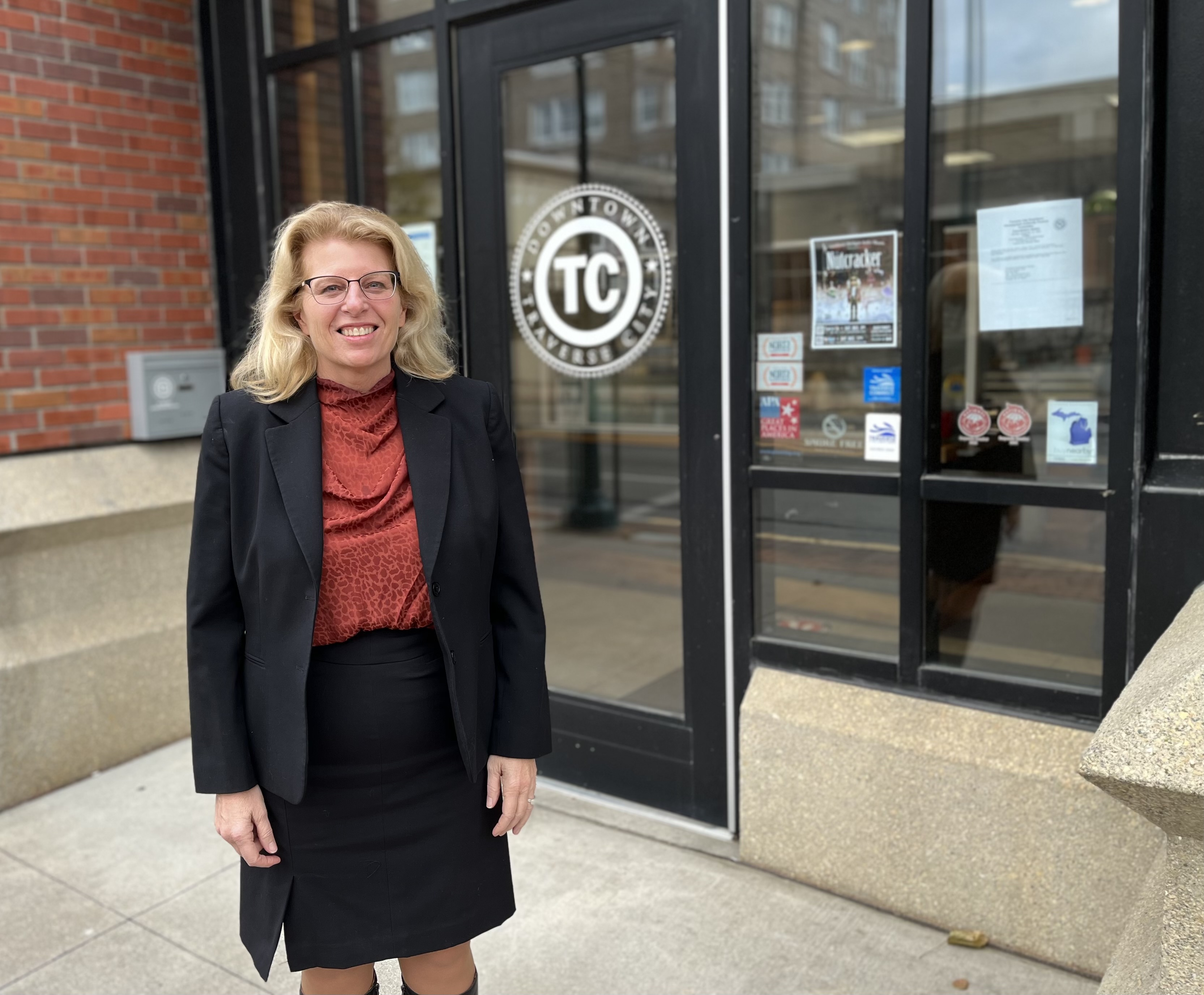 Traverse City Downtown Development Association (DDA) Director Jean Derenzy has a lot of balls in the air, from changing the way traffic moves to questions about parking, managing the retail/restaurant mix, events and an ambitious new integrated plan for lower Boardman. the river to the ticker sat down with him to find out how everything is going and what’s to come.

Ticker: We’ve got a lot of ground to cover, so let’s get to it. Traffic in the city center varies. How are you? And why did we make these changes again?
Derenzy: I think it’s going well. We are slowing down traffic for the convenience of pedestrians. And remember, it’s also about how the city center connects to the larger grid system, and it’s not just cars, but how we’re adapting other pieces of mobility. To go directly east or west you don’t have to make a circle, so it’s a more direct route. And now we don’t use the center as a transit; when it’s one-way, you’re driving faster through much of downtown.

Ticker: The intersections seem a little rushed or poorly thought out, especially at State and Cass, and Union and State.
Derenzy: Yes, that’s some of the feedback we’re hearing, and we’ll look at changing it as needed, particularly State and Cass, State and Union, and Front and Pine. We are working with the engineering department to hear what options are available to address these concerns. Small adjustments like additional signs we could change in February or March; More significant changes like junctions between Cass and State or Union and State would come in May or June when the weather clears.

Ticker: How healthy is our downtown in terms of retail mix, and is business doing well?
Derenzy: My general sense is that it’s a wonderful retail/restaurant mix. It is very healthy and we are very happy with that makeup. In talking to a number of vendors, the supply chain continues to be affected, depending on who you talk to. But we need to keep beating the drum on local shopping, encouraging people to walk in that door and enjoy that downtown shopping experience.

Ticker: Is there such a thing as doing it “too well”? I know that downtown is very, very busy 3-4 months out of the year, with little or no seating in many restaurants.
Derenzy: Yes, but we haven’t touched or looked at the neighborhood as a whole. Even when I talk to people from the state they visit, they say “what a charming downtown.” But I ask him: “Did you go to the Old Town? Have you looked at Garland or Hall Streets or Union or Cass? And they’ll say, “Oh, is there another part past Front Street?”

Ticker: So we need more padding.
Derenzy: Yes! But it’s also back to the vision of having two-way streets to help spread all of that. That is the focus we are striving for.

Ticker: We did a survey in 2016 and parking was the biggest problem. Now, this year, in your survey, people say it’s gotten worse over the last five years. What steps are you taking to fix it?
Derenzy: We are looking at parking and mobility, different means of transport. We are also working with BATA. And the new infill development will eliminate parking, but encourage parking use. People don’t quite want to hang out yet. Did you use the Hardy Deck when you came here today?

Ticker: I’m not sure! But I’m not sure if this problem only happens here? I’m used to walking blocks to park in other towns.
Derenzy: I’m not sure either. I know we have to manage expectations and change them at the same time. We need to change the experience to be more, “I’m good to ride, and it’s a nice ride.” For example, an inch of ice on the pavement is not a pleasant ride.

Ticker: What will it look like in five years?
Derenzy: Well, we’ll probably have three parking spaces. We need to change our behavior over time. And remember, in our last survey, parking was not the main issue. It was to protect the environmental aspects of our town. And why do you come to the city center? Shopping of course, but also outdoor equipment. Therefore, we must embrace not only the buildings, but also the aspects of the water, and develop a different look in the center of the city. You want to make parking a non-experience. And by the way, parking is going to be a big problem—real or perceived—in any healthy downtown.

Ticker: What do you say to people who say they don’t come to the city because of the parking situation?
Derenzy: I don’t want to overreact to the criticism, but I would say give it another try. It’s part of our community and it’s your city center that we offer you. If you say you can’t find parking, we do be parking lot So is it too far for you? Why would I want to go deeper.

Ticker: What about the Riverfront plan? What are the next steps?
Derenzy: We delve into the approach phase to implement it. That last 1.6 miles of the Boardman/Ottaway River has been in pieces for years. So we’re presenting the concepts to the planning and city boards in February and March and then going back to the DDA for a phased approach. That’s the plan.

Ticker: I’m just wondering about the facts. You haven’t done Friday Night Live in a few years, the Chili Cookoff was your biggest event of the winter and that’s been canceled. Are you wondering if facts don’t fit into strategy?
Derenzy: Not doing the Chili Cookoff in 2020-2021 gave us an opportunity to explore what’s next and who the potential partners are. Therefore, we are considering a cultural event that will take place on the 19th of June in the new civic square. But does that replace the Chili Cookoff? No, but we’ve also brought a comedy festival and a parade of lights. So it’s also about how much we can do as a small worker. So it’s not like we’re running away from the facts. With Friday Night Live, we are working with our new experience coordinator to identify different experiences for our community in August, which may be mostly around music and the arts. The pandemic allowed us to see all these things in a different way.

Ticker: I know there has been some frustration about the closing of the State Theater, how and when it opened, and then the various iterations of the Festival. And now they stopped their comedy festival, while you started yours. I am asking about your relationship with that organization and Michael Moore.
Derenzy: I haven’t met the newest executive director of the State Theater and Film Festival, and I haven’t spoken to Michael in at least a year. I can’t blame that on one or the other; I can call him just as easily.

Ticker: But it’s a big component of the center, you have zero control over it.
Derenzy: Zero. We work with the Opera House and their management. We had the Old Town playhouse down here for the Halloween tour. Therefore, having a stronger relationship with the State Theater is a necessity and a priority.

Ticker: Okay, some quick fire questions and answers. What is the biggest complaint you get from local stakeholders around the city centre?
Derenzy: I would say the parking lot.

Ticker: Biggest compliment you’ve received?
Derenzy: success People are here and the doors are open and business is doing well.

Ticker: Percentage chance the west parking deck will be operational in 2023.
Derenzy: It won’t be in 2023, no.

Ticker: Thoughts on the Hagerty layoffs and their impact on downtown.
Derenzy: They have such a large footprint and impact on the city center. That we need to rapidly diversify our economy and work with our partner Traverse Connect to bring more office workers to what we have identified as the board.

Ticker: One sentence on why we still need a DDA.
Derenzy: For downtown viability.

Ticker: What will DDA look like in 10 years?
Derenzy: The focus will always shift… to respond to international, national, local impacts in a city centre, from office to retail… the dynamic is constantly changing.

Ticker: The first project you want to complete in 2023.
Derenzy: I’d say Boardman below.

Ticker: Rate your work at work.
Derenzy: B. You always leave room for improvement, and that’s what I always strive for. You can never give yourself an A for a center. You can never sit in this position.