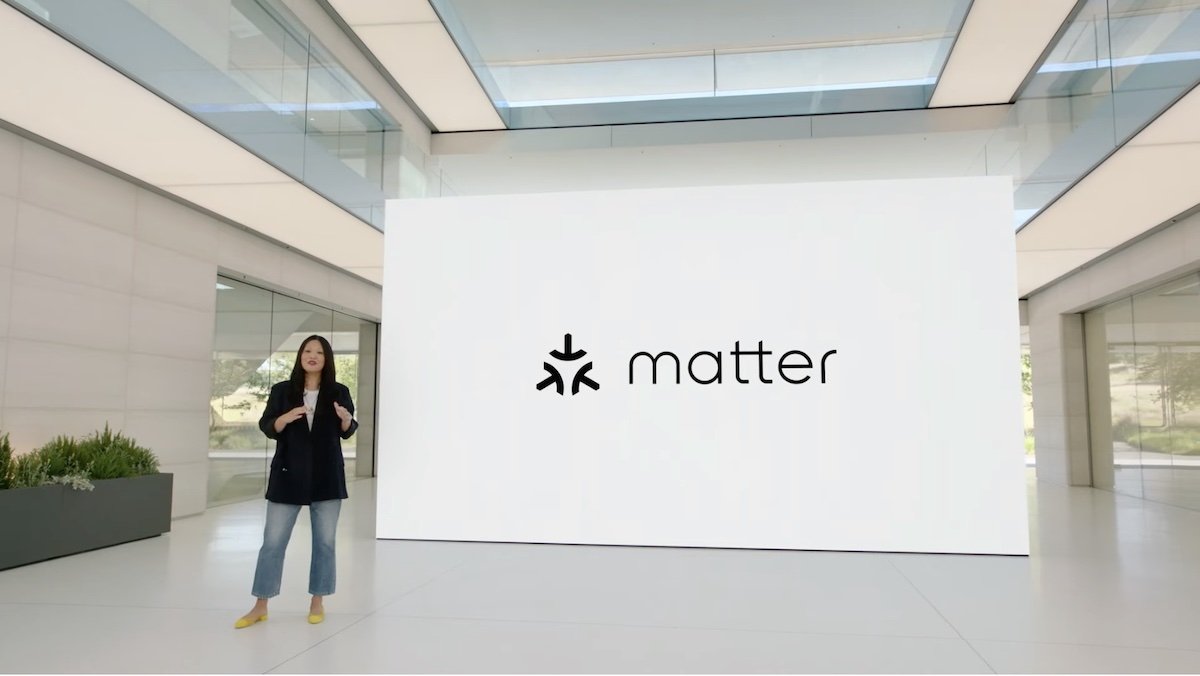 AppleInsider may earn an affiliate commission on purchases made through links on our site.

The new Matter Standard will enable easy, secure communication between brands and smart home devices – and existing devices may be able to be updated to support it.

Although we are still in the early days of modern “smart home” adaptations and integration, early adopters of such technologies have long known that devices from one company may – or may not – work with devices another company.

A newly certified and industry-backed standard, called Matter, promises to eliminate incompatibilities and make almost everything for the “smart” home interoperable. This has the potential to dramatically open up the possibilities for today’s – and tomorrow’s – home gadgets.

Content support arrived on the Mac as part of macOS Ventura, and has come to iOS and iPadOS with version 16.1, including tvOS (which also covers HomePod). This comes on the heels of the Connectivity Standards Association (CSA) confirming the official release of 1.0 Matter in early October.

A key part of this is that over 200 smart home accessories makers have signed up to support it.

By allowing different brands to operate under a common control standard, Matter will provide significant benefits to both buyers and sellers of smart home devices.

For the former group, it will remove much of the “wild west” aspect of product purchasing, and consumers will no longer have to worry about whether their new device can work with their existing settings or their favorite voice assistants .

For manufacturers, there will be a single supported standard that will reduce confusion for buyers, and will also consider products from both start-ups and established brands.

Previously, if you wanted home automation devices from different companies to be controlled by a single, industry-wide protocol, you would have to step into a time machine and travel back to the late 1970s. Back then, the original “home automation” protocol – the X10 network – allowed for a “command center” to control lamp triggers and other light switches.

This allowed manual control via a console or by setting timers connected to outlets to trigger on/off states. The systems “communicated” via radio signals through home electrical wiring using Powerline technology – the same system used in non-mesh Wi-Fi extenders today.

As such, the early years of home automation relied heavily on gadget enthusiasts willing to brave future obsolescence for the fun of controlling appliances. X10-controlled products are still available, although they have now largely relegated to niche and device replacement markets.

With the rise of the internet and the later emergence of Wi-Fi technology to spread connectivity throughout the home, established companies such as Google moved quickly to create or acquire technology that transferred its influence into devices that were not was “smart” before in the modern. understanding of the term. This led to an expansion from products focused on security to televisions, temperature control, and more.

Technology moving from the “computer desk” to places like the basement and the living room was not without hiccups, however.

In 2014, Google’s Nest division bought the smart device company Revolv and then – just two years later – Revolv’s servers were shut down, causing those products to stop working and angering buyers.

Earlier this year, popular maker Insteon and its parent company SmartLabs were caught off guard by supply and liquidity problems and shut down abruptly. This reduced communication with the central SmartLabs servers that the devices relied on for communication – and joined companies such as LIFX and SmartDry to fleece consumers who had invested in those products.

This has driven consumers to hedge their bets by purchasing smart home devices made or endorsed by large tech companies that are considered less likely to go out of business or abandon their commitment to buyers. This includes Google (despite the Revolv incident), Amazon, Samsung, and Apple, among others.

As a result of this also the different companies started talking to each other about how to make their devices and the services they rely on more resistant to bad luck in the market or changes in technology. In turn, this makes the devices more manageable for consumers.

Modern smart home gadgets now use devices that can act as, or double as, hubs to facilitate inter-device communication. However, the hubs themselves still rely on a connection to the manufacturer’s servers for things like firmware and feature updates.

If you have a HomePod or Apple TV 4K, they act as hubs for many other devices – but currently those devices, regardless of brand, must support Apple’s Homekit framework if you want to control them all with Apple’s Home app .

CSA, IP, and the Apple connection

The new Matter standard will be a comprehensive command and control system that will give consumers the freedom to mix and match smart home devices without worrying about interoperability. And with the goal of controlling all the devices through one app, if desired.

The former Zigbee Alliance, now known as the Connectivity Standards Alliance, brought together device makers, technology companies, and other industry leaders alike to agree on a way for devices to stay connected, speak the same “language” to each other, and communicate securely.

The core of Matter is based on the Internet Protocol, the same networking technology that servers, routers and websites use to function.

Apple, one of the original group of companies to collaborate on Matter, made the HomeKit API the basis of the open source standard. As a result, the security of inter-device communication — previously not considered by most manufacturers — became as important as widespread adoption in the industry to ensure strong trust among consumers.

Thread, an IPv6-based low-power mesh networking technology already on the market, complements Matter by adding standards for device-to-hub communication that are supported in two main ways:

Apple and other manufacturers are already shipping devices with support for Thread, such as the newest Apple TV 4K model and all current HomePods.

Matter acts as a common “language” between different companies’ devices, and like Thread, it can be supported or added to many current or recent devices through a firmware upgrade.

Apple’s recent HomeKit-enabled products are considered more likely to be upgraded to support Thread and Matter, since HomeKit technology has been incorporated into these standards. But major companies have not yet explicitly confirmed which devices can or will be updated.

While Thread will serve as a networking hub among the various companies’ existing toolkits, Matter will provide secure, universal communication and coordination for all smart home hub devices that support it, or can be upgraded to support it. Consumers will finally be able to choose devices based on what the device can do to further automate their home functions, rather than being limited or bound by specific brands and technologies.

This should result in smart home technology “going mainstream” with the public, boosting sales and encouraging further innovation among established providers and start-ups alike.

For Apple users and smart home enthusiasts, the road ahead is looking a lot smoother now.