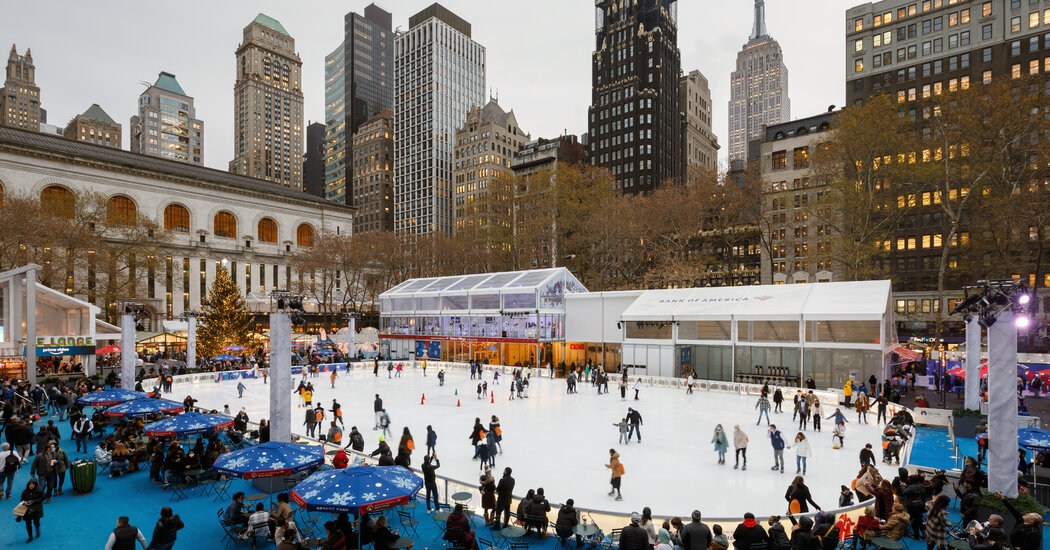 Store windows light up with twinkling bulbs, a vintage cherry-red train pulls into Times Square, a musician sings a classical tune, and Christmas trees light up the Manhattan sky: the holiday season has arrived in New York. This year’s events include a modernized “Nutcracker,” the Rockettes’ famous kick line, and an opera in a soup kitchen. Here’s a list to get you in the holiday spirit.

With a one-ton Christmas tree that grows up to 41 feet and a cast of 126 who jump, spin and dance, the New York City Ballet presents “George Balanchine’s The Nutcracker” annually at Lincoln Center’s David H. Koch Theater through December. 31. For a new twist on the holiday classic, “The Brooklyn Nutcracker” plays at the Kings Theater on Dec. 17; includes a hip-hop dance battle, bohemian Mother Ginger and a trip to the Land of Sweets, with a stop at the Flatbush Avenue subway station. In the Bronx, the Westchester Ballet Company, a youth troupe, will present its own interpretation of “The Nutcracker” at the Lehman Center for the Performing Arts, Dec. 16-18.

In this year’s “Christmas Spectacular,” the ever-sharp Radio City Rockettes will add a new routine, along with classics like “The Dance of the Frost Fairies,” “The Parade of the Wooden Soldiers,” that have remained mostly unchanged since 1933. Families can enjoy the Rockettes’ heavenly kicks and dazzling leotards at Radio City Music Hall through January 2nd.

Carnegie Hall’s “Sing! An Irish Christmas” on Dec. 15 with Keith and Kristyn Getty and two nights of holiday tunes on Dec. 16 and 17 with the New York Pops and indie artist Ingrid Michaelson. And on December 19, the Oratorio Society of New York, following one of the Hall’s longest performances, will perform Handel’s “Messiah”, as it has done almost every year since 1891.

In the new David Geffen Hall, the New York Philharmonic will also perform “Messiah” December 13-17 under the direction of Masaaki Suzuki, and the Holiday Brass will perform classics by Gustav Holst and Georges Bizet on December 16 and 17.

The Metropolitan Opera will continue its annual holiday tradition by presenting the family-friendly version of Mozart’s musical tale “The Magic Flute”: an abridged English-language production with live puppets by award-winning theater director Julie Taymor. There will be nine performances, starting on December 16. The December 16th performance will be broadcast live on Met Opera Radio, and a recording will be broadcast on the Toll Brothers–Metropolitan Opera International Radio Network on December 24th.

Before the Dec. 18 matinee, the company will bring its in-person Holiday Open House, where children and families watching the performance will have the opportunity to meet the Met’s musicians, dancers, actors and members of the wig and costume shop.

The Jazz at Lincoln Center Orchestra’s Big Band Holidays concert, featuring jazz singer Samara Joy, will be performed at the band’s home theater, December 14-18. A special performance for children and adults with autism or sensory and communication needs will be held on December 18 at 2:00 p.m. For children ages 8 months to 8 years, Jazz at Lincoln Center will also host its annual Holiday Jazz Jam on December 17: a. A children’s party that encourages you and your little ones to sing and swing with the WeBop Family Jazz Band.

Zoo animals and sea creatures will come to life at four locations in New York and Long Island through January 8. in Staten Island and ride the lighted swings at “Illuminate the Farm” at the Queens County Farm Museum.

Check it out in “Lightscape,” a sunset tour at the Brooklyn Botanic Garden that debuted to sold-out crowds last year. Through January 8, the one-mile trail winds through 52 acres of landscape and features more than a million twinkling bulbs climbing from branches and tree trunks, as well as sculptures of paper cranes and migrating birds. And at the New York Botanical Garden in the Bronx, visitors can see model trains past more than 100 miniature New York landmarks, such as the Empire State Building and the Statue of Liberty, made from found materials such as Holiday’s pine trees and cinnamon sticks. Train Show, until January 16. The garden is also home to “Glow,” one of the city’s largest holiday light experiences, which displays thousands of energy-efficient lights choreographed to sound. It will be until January 14 on selected days.

In a one-man production of “A Christmas Carol” that our reviewer called “breathless entertainment,” Jefferson Mays plays Ebenezer Scrooge and everyone else, including a boiled potato. Unlike the 2019 Broadway production, which emphasized unity and generosity, this adaptation follows Scrooge’s lonely journey to self-realization (and may scare children under 12); It will be at the Nederlander Theater until January 1st. For other variations on the Charles Dickens classic, visit the Off Broadway Players Theater through December 30, or see John Kevin Jones tell the timeless story of Dickens himself through December at the Merchant’s House Museum. 29. The 60-minute performance will also be available to watch virtually until December 30.

“RuPaul’s Drag Race All Stars” contestants BenDeLaCreme and Jinkx Monsoon will bring laughter and glamor to City Hall with “The Jinkx and DeLa Holiday Show” on December 2nd and 3rd. On Site Opera Company, a company that presents operas in non-traditional venues. , will perform Gian Carlo Menotti’s “Amahl and the Night Visitors,” with a chorus of former homeless people, December 8-10 in a Manhattan kitchen. (Attendees are encouraged to donate nonperishable food items.) And Grammy-nominated vocal quartet Kings Return will serenade Harlem Stage audiences with a cappella arrangements of holiday favorites, along with album originals, at “Uptown Nights: Kings Return” in December. 16 and 17

After two years of virtual performances, the Apollo Theater’s “Kwanzaa: A Regeneration Celebration” returns to the audience on December 30 with Abdel R. Salaam’s Forces of Nature Dance Theater, a fusion of West African, house and hip-hop rhythms. with other performers to reflect on the seven principles of the festivities.

For those who want to practice axel or strap skating for the first time, there are several rinks to choose from around the city. Central Park’s Wollman Rink offers season passes and regular and VIP tickets through March. Bryant Park transforms into a Winter Village, with vendors selling fresh baked goods and jewelry, and an ice rink in the center, also open through March. Entry is free with a reservation but there is a fee to rent skateboards. For another free rink (with skate rentals available), head to South Street Seaport, gliding down the East River through January 16. And the LeFrak Center in Brooklyn’s Lakeside offers both an outdoor track and an indoor track overlooking Prospect Park Lake. For ice skating or hockey lessons, until April. The rink also offers valid passes for frequent skaters and a skate school for beginners.