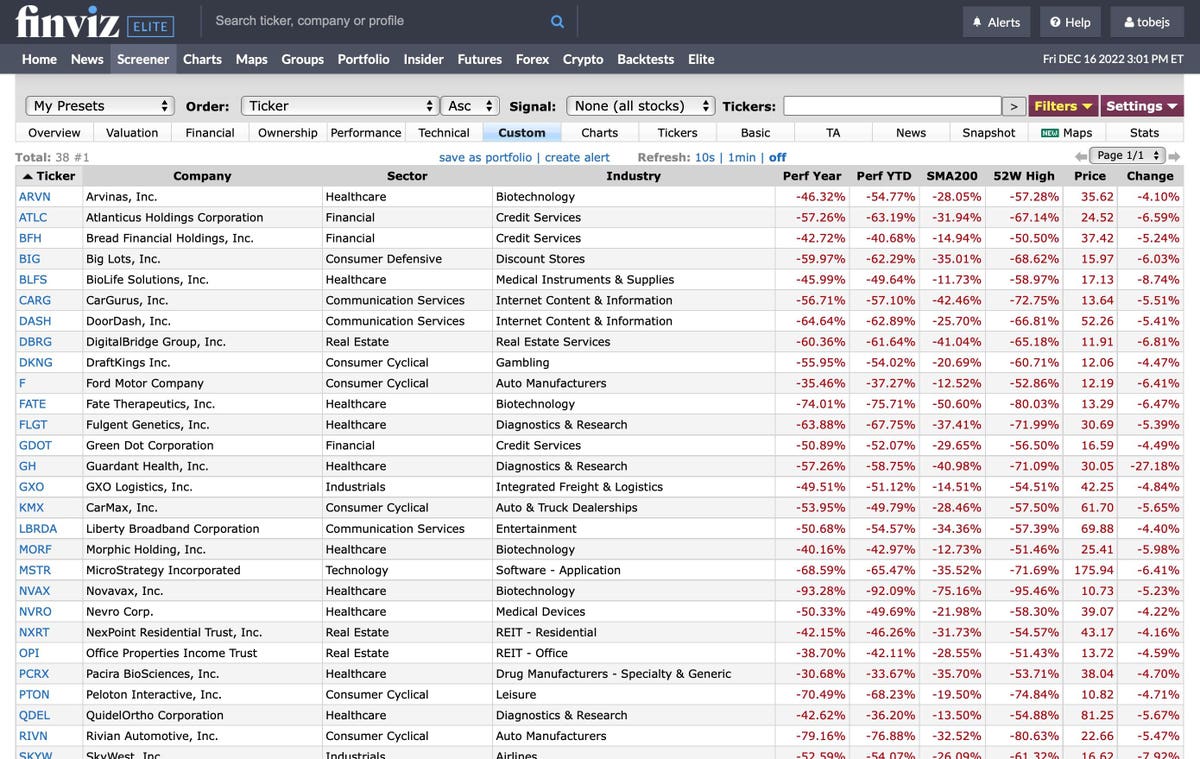 Last month, I described why a stock market crash was likely. Episodes like this are meant to “shake” weak investors out of previously popular stocks, re-establishing values ​​and creating strong foundations for future gains.

Cleaning is another process. They arrive when the markets are overloaded with waste. Call it trash, garbage or ugly waste. It’s what’s left after fads fail and dreams of riches evaporate. It’s a cleanup of failed investments.

In the excitement of the stock market in 2021, many of today’s dead were alive. Examine them now and say “Uck!” is an apt description. However, they still mess around, albeit on life support from a die-hard fan.

Why can’t they continue their mere existence? Because the markets will dump them. Without a solid foundation, trades dry up and disappear. Some will be so cheap they will be acquired for some business reason or fire sale. Others will go inland or simply close their doors.

So which investments are ripe for clearing?

The main groups are:

One of Wall Street’s worst creations ever. Sold as safe (you can get your entire $10 back!), the “magic” was finding a great company to be bought by a great person. Cash in hand, the deal would go through and the SPAC holders would see huge profits. However, the big catch was that each SPAC had “sponsors” (a Wall Street label that hid the real descriptor: “free-loading insiders”), and they received a whopping 20% ​​of the new deal at minimal cost. Mathematically, using $0 for backers, 100% of the money given by the SPAC investors turned into 80% of the new company. Unless the purchase is made at a price below 20% of fair value, this means that the investor’s actual book value has only fallen by 20%. Also, the “backers” were free to sell their shares at almost any price and still make a healthy profit (the benefit of the “buy” at almost $0). No wonder the stock charts of completed deals are so awesome.

These offerings were simply high-risk, venture capital deals that raised money to pay for the company’s expenses. Ops were basically scientists working on a shiny project (a compelling reason to buy it) whose low probability of success made them fail. That’s why almost all biotech IPOs have 90% losses: the money is gone and there’s nothing to show for it.

Like biotech IPOs, the money raised is venture capital to cover expenses. Likewise, the “story” was a brilliant project. The problem was that it was a long and uncertain road to creation, production, sales and, above all, profit. Stock stories, devoid of real and essential progress, are destined for the dustbin when the luster of the story wears off.

These were short-lived bursts that could cause Internet-connected individual investors to rush up frustrated stocks and pay short sellers on Wall Street to cover (buy) their short positions. Power to the people! Only things didn’t turn out as planned, leaving a trail of tears and loss for those still hanging on. (When GameStop had its initial run, I checked the Meme investor hangout, Reddit. There were many congratulatory comments with the same vision and instruction: they could beat Wall Street by staying together and continuing to buy and hold, thus forcing the short sellers to push the price higher. Believing chat board “pledges” not to sell is so… Well, you give the descriptor. However, stock charts show loss-filled results, as well as the presence of other holders.

Stripped of cash and debt capacity to provide “dividend” payments to private equity owners, the stock of companies such as Dole and Weber were remarketed. The prospectuses included beautiful color photographs and there were discussions about how desirable the company’s products were. Alas, the money raised first depleted the company’s finances to protect it. Growth was mentioned, but labeled as an unlikely end result.

When management wants your money but not your control, it offers less than 50% of the shares for sale, or creates a different class of shares with fewer or no voting rights. But hey, you get to ride the wave, right? Well, no. For example, BDT Capital, the private equity fund that owns 85% of Weber stock, recently offered to buy back the 15% it sold for $14 a share less than 1-1/2 years ago. The $8.05 offer has just been approved by the Board (whose responsibility is it to look out for the interests of the shareholders, and who owns the most shares?). From there The Wall Street Journal article (emphasis mine)…

“Weber’s board has already approved the deal, and interim CEO Alan Matula said the transaction delivers”immediate and fair value” to the company’s minority shareholders.”

The chairman of the board said that the price was fair because the stock market and the company’s fundamentals had deteriorated during those fortnight. Was the forced sale of that 15% block of shares at a 40% loss legal? yes Without more than 50% ownership, these minority shareholders were in the hands of the majority owners. So goodbye Weber.

Could Dole be next? Maybe…

Conclusion – There is good news after the cleanse

Like a spring cleaning, a deep cleaning cleanses the stock market. Out of sight means out of mind, and a fresh environment means a fresh perspective. A scene from the movie “Margin Call” takes place after many workers are laid off in one day. The head calls out to those who remain, saying (emphasis mine)

“You are all here for a reason. 80% of this floor had just been sent home, forever. We spent the last hour saying goodbye. They were good people, and they were good at their jobs, but you were better. Now they are gone. They will not be thought of again. This is your choice. You are all alive. And that’s how this company has been growing stronger for 107 years.”