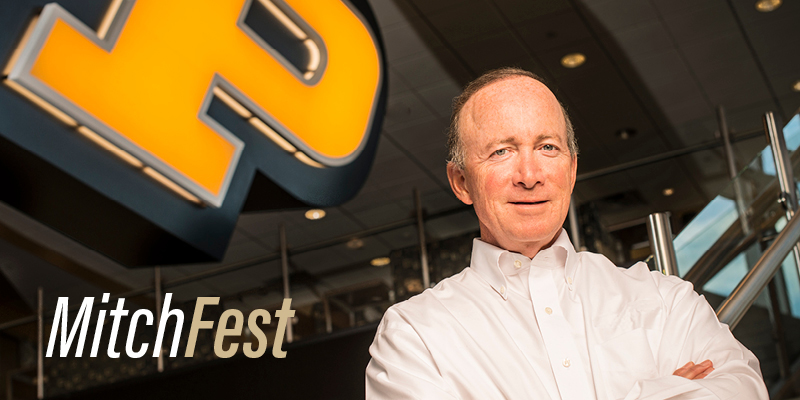 WEST LAFAYETTE – Purdue University will honor President Mitch Daniels and the unprecedented impact of the Daniels Decade through a series of public celebrations and uplifting events during the first week of December.

The Purdue Board of Trustees invites the campus and Greater Lafayette community to “MitchFest,” will feature an off-campus festival on December 2, a symposium on research freedom on December 5, and a Presidential Lecture Series conversation between former US President George W. Bush and President Daniels on December 6.

“Mitch has been a transformative leader for the university, and we want to send him off in style,” said Mike Berghoff, chairman of Purdue’s board of trustees. “Although he has never relished the spotlight, President Daniels deserves to be recognized for all he has done for our students, faculty, staff and the entire state of Indiana. ‘MitchFest’ is just one small token of our collective appreciation, filled with laughter, joy and opportunity , once again to exchange world-changing ideas with the faculty, staff, students, alumni, and community members that President Daniels loves so much.

The list of key achievements of the Daniels Decade has, through individual steps, become a collective leap for Purdue, touching tens of thousands of students, faculty and staff, transforming the landscape of higher education and demonstrating the vital role universities play in fostering. economic development and success at the local, state, national and global levels.

“There is no college leader like Mitch Daniels. President Daniels made Purdue the leading public university in the United States during the Daniels Decade,” said Purdue President-elect Mung Chiang. “Our university set records for student access and success, research and innovation, and transformative growth. Mitch is also America’s most innovative president: through freezing tuition. affordability, 21st century land-grant through Purdue Global, and Indiana’s economic growth through entrepreneurship and the Discovery Park District. No single event can encompass all of his impact, and MitchFest is one of the many ways we’ll say ‘thank you’ to President Daniels.”

Kicking off MitchFest throughout the week is a community-wide Mitch Streetfest beginning at 1:30 p.m. on Friday, December 2, at the corner of State and Grant streets, with an appearance by the Purdue “All-American” Marching Band and members of the Purdue band. pete Giveaways, cold-weather refreshments and opportunities to meet President Daniels and take selfies with him on the Purdue Memorial Union lawn are also planned.

The symposium, “Freedom of Inquiry and the Advancement of Knowledge,” will be held Monday, December 5, at 6:00 p.m. in the Stewart Center’s Fowler Room. Steven Schultz, Purdue’s general counsel, will moderate the event, which is free and open to the public. Joining Schultz on stage are three leading free speech experts:

Former US President Bush will share the stage with Daniels for the final event of Daniels’ tenure in the Presidential Lecture Series on Tuesday, December 6 at 6:00 pm in the Elliott Hall of Music. The free event, titled “A Conversation with George W. Bush,” is sold out.

The Presidential Lecture Series, sponsored by the College of Liberal Arts, features a discussion between Bush and Daniels on leadership in challenging times and the responsibilities of informed citizenship. Daniels was President Bush’s first budget director from 2001-03.

Other events with Purdue leadership and key personnel; with alumni, community and state leaders; and with teachers is also planned as part of MitchFest to celebrate Daniels’ decade of senior leadership.

Purdue University is a leading public research institution developing practical solutions to today’s toughest challenges. Ranked as one of the 10 most innovative universities in the United States by US News & World Report for each of the past five years, Purdue offers world-changing research and out-of-this-world discoveries. Committed to real-world, hands-on and online learning, Purdue provides a transformative education for all. Committed to affordability and accessibility, Purdue has frozen most tuition and fees for the 2012-13 classes, allowing more students than ever before to graduate debt-free. See how Purdue never stops looking for the next giant leap at https://purdue.edu/.