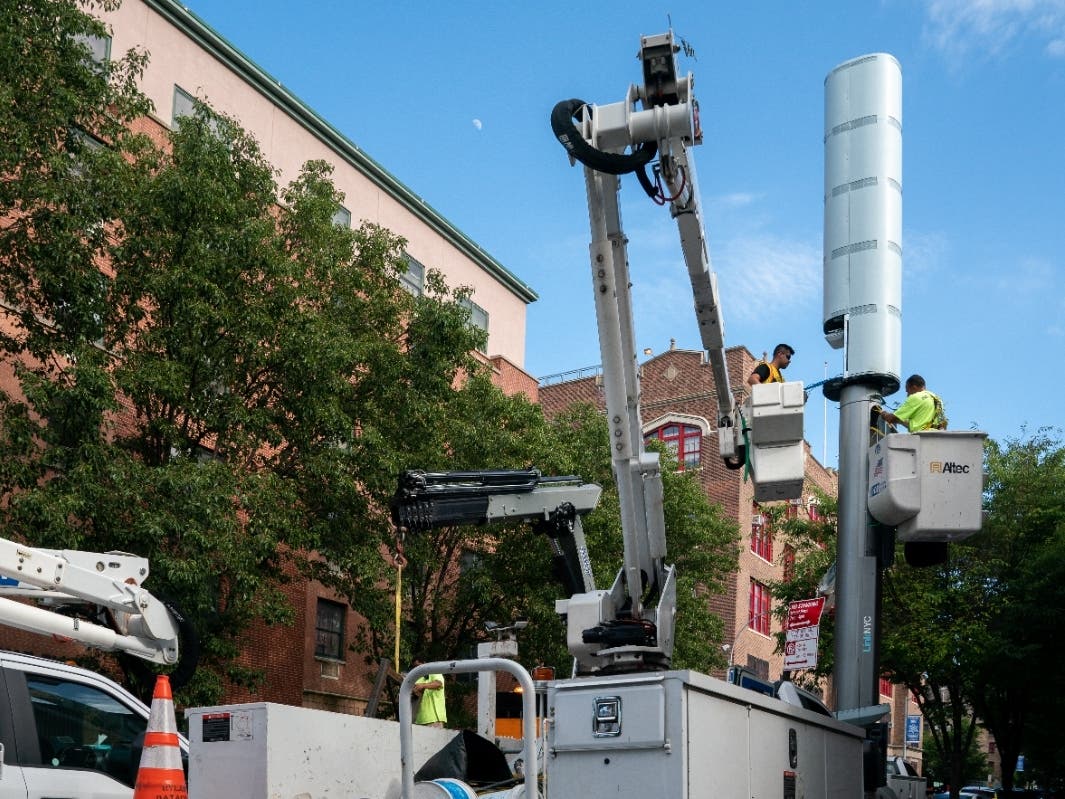 UPPER EAST SIDE, NY — An Upper East Side community board voted overwhelmingly on Wednesday to tell the city not to install giant 5G transmission towers in the neighborhood — although the city could go ahead with its plan anyway.

Objections centered on the towers’ height (32 feet), their aesthetic impact on the neighborhood’s historic districts, and some more shaky claims that the poles would pose a public health threat. (Experts and city officials have said the towers are safe.)

“I think they’re just gigantic and they’re huge and they definitely stick out like a sore thumb,” City Councilman Keith Powers said during Wednesday’s session.

Councilwoman Julie Menin said the city’s Office of Technology and Innovation, which directs the LinkNYC program, told her they would not be canceling any planned towers due to “radio frequency emission concerns.”

But the agency would consider removing poles that block sidewalk accessibility or interfere with outdoor dining sheds, bus stops and other “specific block conditions,” Menin said.

OTI told the board that installation of the towers could begin by mid-January, depending on resident feedback.

The city has touted the towers as a way to “bridge the digital divide” by extending high-speed internet service to underserved neighborhoods and the approximately 1.5 million New Yorkers who lack both home and mobile broadband .

But several residents speaking on Wednesday questioned why the 5G poles are coming to the Upper East Side at all given the neighborhood has high rates of internet and mobile broadband access.

“Why are we using New York City’s limited resources to build these poles in neighborhoods where this isn’t a problem?” said resident Sue Moss, whose apartment building will have a pole installed in front of it.

The board voted 40-2 to pass a resolution asking the city to wait to install the 5G towers. A separate resolution targeting the city’s Landmarks Preservation Commission — which must approve the 10 towers in the Upper East Side’s historic neighborhoods — passed 42-2.

The city began installing the 5G towers earlier this year, which use extra-fast cellular technology to power Wi-Fi, USB chargers, nationwide calling and access to 911 and 311. LinkNYC is a joint venture with the sometimes troubled private consortium CityBridge.

Also during Wednesday’s meeting, board members announced an apparent solution to the case of the moving public artwork whose planned installation on Park Avenue sparked safety concerns last week.

At the previous meeting, members of CB8’s Parks Committee feared that artist Raul Mourão’s steel sculpture could become a climbing destination for “roguish teenagers,” in part because its upper portion is capable of gently swaying back and forth.

The committee had passed a resolution asking the city to immobilize the sculpture – although a gallery representative said the artist “may not be comfortable with the continuation of the project” with these changes.

By Wednesday, however, committee chair Judy Schneider said she had received assurances from the Parks Department that the sculpture would swing only 30 degrees — a “minimal” movement. The board therefore voted to approve the project without mentioning the movement of the sculpture.

Still, some said they were disappointed that the committee ever requested such a change.

“I’m offended that we would even consider asking the artist to change it,” said member Loraine Brown.