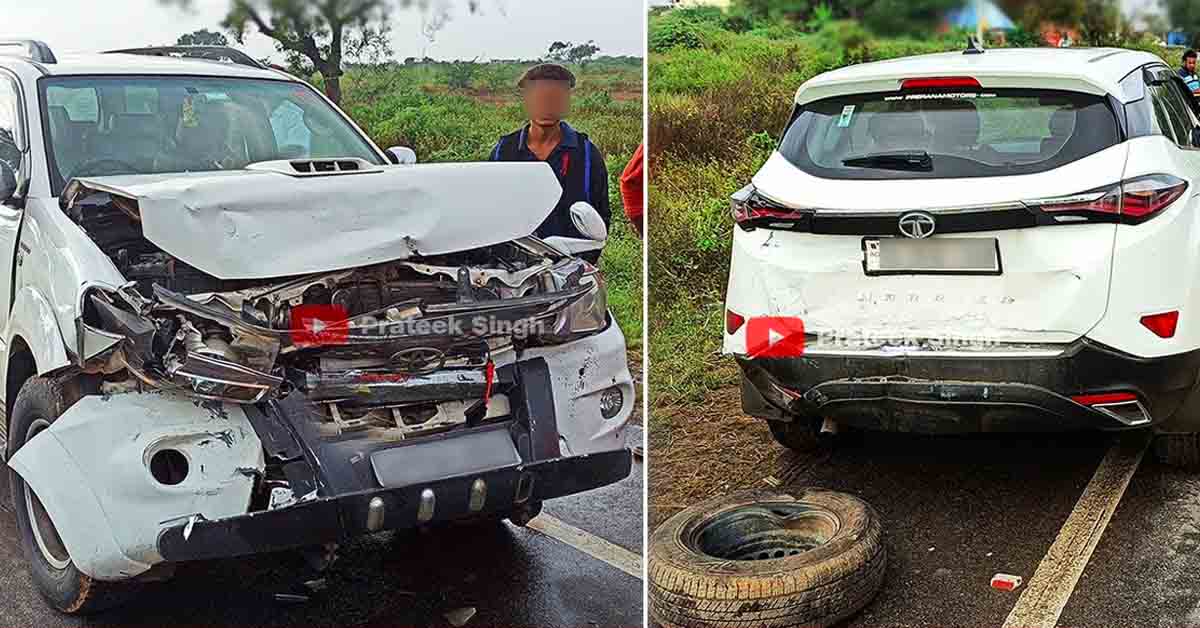 Tata Harrier and Toyota Fortuner are one of the most talked about SUVs in the Indian market and offer a powerful and capable package to buyers. Recently an accident between two SUVs was reported in which both the SUVs sustained some major damage Here’s everything you need to know about this Toyota Fortuner and Tata Harrier accident

Both drivers are safe

The incident happened in Karnataka’s Gangavati when two vehicles were crossing the road at high speed. At that time a dog came on the road and the driver of the Tata Harrier applied emergency brakes to save the dog. In due process, the driver lost control when the Toyota Fortuner coming from behind failed to stop in time and rear-ended the Tata Harrier. Those who saw the accident said that both drivers were absolutely safe.

As we can see from the pictures, the front end of the Toyota Fortuner was badly damaged by the high-speed impact leaving a band from the bumper to the bonnet. And looking at the pictures of the Tata Harrier, it is known that the rear left part of the SUV including the tailgate, bumper and left tail lamp has been damaged. The spare wheel was also found lying on the road as the clamp was broken by the speeding car.

If we talk about the ASEAN NCAP test, the Toyota SUV has been given a 5-star safety rating, out of which it has scored 34.03 points in Adult Safety and 13 out of 18 points in Child Occupant Protection as a safety feature. It gets 7 airbags, seat belt warning, overspeed warning and anti lock brakes with Electronic Brakeforce Distribution (EBD). The Fortuner is offered with two engine options in the Indian market. The 2.8L 4-cylinder diesel engine produces 204 hp with 420 Nm. The SUV’s 2.7L petrol engine generates 166 hp with 245 Nm of peak torque. Currently, it is priced from Rs 32.59 lakh (ex-showroom). The new Fortuner next-gen model will be launched in the country soon.

Tata Harrier is one of the most powerful, feature rich and powerful SUVs in the segment It is offered with a 2.0L diesel engine that produces 138 hp and 350 Nm. Tata Harrier has features like 6 airbags, electronic traction control, electronic stability control, off road ABS and hydraulic brakes. The Indian carmaker will soon launch the Harrier facelift. The new model will come with updated safety technology and features. It will be positioned as a rival to MG Hector and Mahindra XUV700.

Join our official Telegram channel for free latest updates and follow us here on Google News.