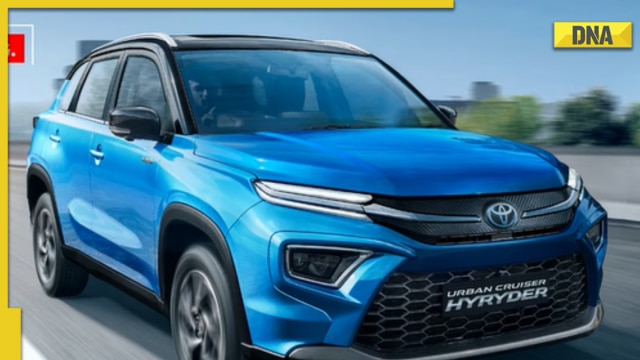 Hyryder CNG with factory CNG kit in both S and G grades.

Toyota Hyryder CNG will be launched in India next week. Toyota recently launched the Hyrder SUV in India and till now, the car was only available with petrol engine. The company plans to launch the Toyota Hyrder CNG variant in India in December 2022. The Hyryder CNG will be Toyota’s first SUV with a CNG fuel option. The company has already started accepting bookings for the car and deliveries are expected to begin soon after the launch.

Toyota Hyryder price in India starts from Rs 10.48 lakh (ex-showroom) and the CNG variant of the car is likely to be priced Rs 30,000 – 40,000 more than the petrol variant. Soon after the Toyota Hyryder CNG launch, its sibling Maruti Suzuki Grand Vitara is also expected to get the CNG variant.

The Toyota Urban Cruiser Hyryder comes with a double-layer LED DRL that joins the piano finish grille which is surrounded by a chrome stripe. The car features a long bumper, sporty air dam and elegant full-LED headlamps. At the rear, the SUV gets C-shaped LED tail lights that are flanked by a chrome strip. The Toyota logo is placed in the center of the strip. 17-inch alloy wheels offer the vehicle a tall stance.