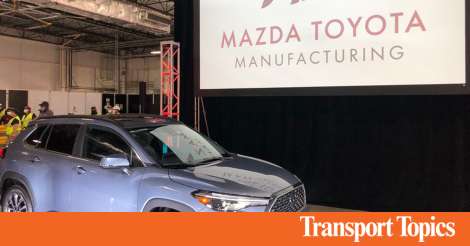 The Toyota Corolla Cross is the first vehicle to be produced in 2021 at Mazda Toyota in Huntsville, Ala. (Paul Gattis/al.com via Tribune News Service)

[Stay on top of transportation news: Get TTNews in your inbox.]

The president of Toyota Motor Corp. is publicly questioning whether the auto industry should make a quick transition to electric cars.

The Wall Street Journal reports Akio Toyoda said during a recent visit to Thailand that a “silent majority” of auto executives question whether EVs should be a stand-alone option.

“But they think it’s the trend so they can’t speak out,” Toyoda said.

The comments came from the head of the world’s largest auto company, which has resisted moves by other automakers to eventually switch to all-EVs. And he’s not alone.

Host Michael Friese tells the story of a cybersecurity crisis at a transportation and supply chain management company and discusses strategies for avoiding cyberattacks with a 30-year veteran of automotive cybersecurity systems. Listen to a snippet above and get the full program by visiting RoadSigns.TTNews.com.

As the Journal notes, Mazda Corp. executives once publicly worried that EV batteries were too large and expensive to replace gas-powered models. They also say whether EVs are a clean mode of transportation depends on where the electricity is generated.

The two companies own a $2.3 billion joint manufacturing plant in Huntsville, Ala.

Toyota, unlike other motor companies, has taken a slow approach to fully electric vehicles, despite its pioneering work with hybrids. By the end of 2021, the company has pledged to release 30 electric cars by 2030 and invest $17.6 billion in electric battery technology.

Mazda has announced plans for 25% of its global product line to be fully electric by 2030, with all models having some form of electrification.

According to JD Power, as of October, electric vehicles accounted for about 6.5% of the total US new-car market and growing. But most of those gains are coming to states like California, according to the Journal.

Other auto manufacturers in Alabama have their own timelines for electrification.

Mercedes-Benz announced earlier this year a commitment to build only electric vehicles by 2030 — as market forces allow. That’s after pumping nearly $1 billion into its Alabama operations to build electric SUVs.

Hyundai has the electrified Genesis GV70 and a $300 million investment in Alabama. Honda announced earlier this year plans to spend about $39.8 billion globally on electric models, launch 30 new electric car models by 2030 and develop a lightweight battery.